The facility, the first of its kind, will enable Haskel Europe to offer its suppliers and customers the benefit of real-life simulation at extremely high pressures to develop more advanced products for hydrogen applications before releasing them for public use.

Haskel built the facility in response to a growing awareness of the environmental impact of traditional hydrocarbon fuels and an understanding of the importance of hydrogen as a zero-emission energy source in any future energy mix.

Increasing the use of hydrogen could deliver a fifth of the greenhouse gas emission reductions needed by 2050 to limit the impacts of climate change, *according to the global Hydrogen Council – a collective of automotive and energy firms. 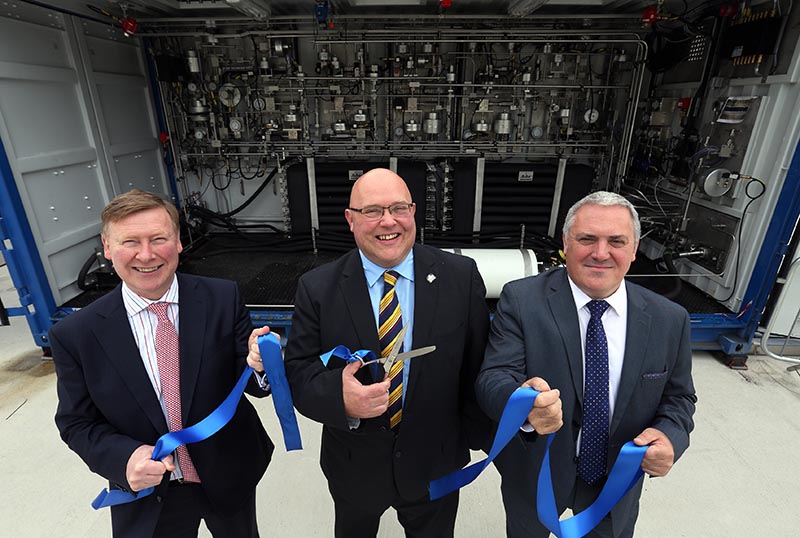 In the UK alone, it is predicted that hydrogen fuel cell vehicles could account for half of all cars on British roads by 2050. The opening of Haskel Europe's hydrogen testing facility is a significant investment, one supported by Sunderland City Council’s business investment team.

The new center will be used to test single hydrogen parts through to fully integrated refueling systems. Previously, testing of hydrogen components in Europe was only possible on a small scale, in laboratory conditions. Haskel will shortly commission an SAE J2601 fueling facility at its Sunderland plant, complementing its testing capabilities.

Stewart Anderson, Haskel Europe’s Hydrogen Engineering Manager, believes the facility will have worldwide appeal as the push to adopt hydrogen increases. “Our new facility represents a major step forward, giving companies everything they need to test their technology and components to the absolute limit,” says Anderson.

“This is an important hydrogen facility for the sector worldwide, and I’m delighted that Haskel’s Sunderland HQ has taken the initiative to build it. It proves yet again that the city hosts some of the UK’s top companies, and that the council does all it can to help them thrive," stated Councillor Graeme Miller, leader of Sunderland City Council.

“We worked closely with Haskel to help to put in place the resources it needed, and it’s rewarding to hear that these are leading to further contracts as a result and strengthening Haskel’s position as a global leader in its field,” added Councillor Miller.

Darran Heath, Global Hydrogen General Manager at Haskel Europe, added: “Being able to test hydrogen products and systems in a working environment is essential if this emerging clean fuel source is to live up to its huge potential.

We are already talking to a number of car manufacturers and other stakeholders and plan to play an important role in further advancing this exciting field.”

Like Haskel, Haskel Europe has extensive experience in supplying gas boosters designed specifically to work with pressurized hydrogen gas. The opening of this hydrogen test center continues to reinforce Haskel's commitment to quality and reliability for customer success.

Learn more about the advancements Haskel is making, connect with our team.