Haskel’s dedicated team of experts continuously shows their commitment to solving critical challenges, both at work and in their personal lives. Exemplifying our organization’s reputation of quality, safety, and reliability, we’ve seen our team members participate in some great events. For three individuals, they’ve been carrying out these values for the past seven years with their participation in the Cancer Research UK and Marie Curie Swimathon.

Each year, Steve Learney, Paul Peverley, and Peter Kaveney complete a 5-kilometer swim to raise money for these foundations – a feat that would be much easier if they could have used Haskel high-pressure solutions andbreathing air equipment. But for this swim, the men put their focus on the cause rather than the business they work in. This year, Learney completed the swim in 41 minutes, the same time as the first Swimathon they participated in, while Peverley managed an amazing 36 minutes! 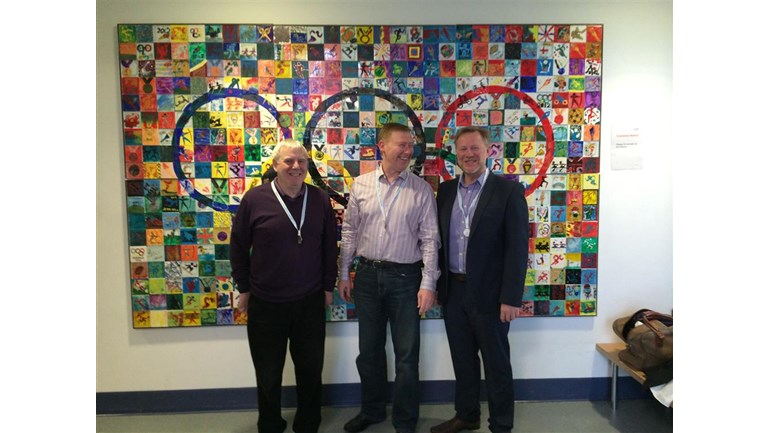 Because our teams at Haskel all travel so much, opportunities to keep a healthy routine are few, so when a new swimming pool opened near our UK factory, we all began to use it. They advertised the Swimathon event at the pool, and (over a beer) we all thought it would galvanize our health efforts and raise money for a great charity at the same time.

Training for the event keeps me active throughout the year. Even with my travel schedule I am able to do a 30-minute swim most weeks. In the post-Christmas recovery, I start trying to swim 2 – 3 times per week. Gradually I build up my time and distance to be on or close to the distance needed for the Swimathon event one week beforehand. This year was particularly difficult because of a knee injury I’ve been trying to work off since December.

The same reasons we committed to our first event are still why I keep participating each year. In the years since we started the swimming event, we have all also had someone in our lives affected by cancer. The personal importance of supporting organizations that support cancer fighters and survivors became stronger.

The drive to participate in the Swimathon came from knowing that we have all been affected by this cruel disease, whether it is personally, a family member, or a friend. Supporting a charity that will one day put an end to this painful experience in life is a major reason why I personally wanted to take part in the event.

It became more personal this year with the loss of Peter’s niece. We swam in memory of her and smashed our previous donation totals. We’re really proud we were able to achieve that and a special thanks goes out to the people who donated so generously.

Beyond the personal and emotional reasons, I regularly swim just to keep up general health and there are some nice outdoor pools in Australia so it’s a bit of a pleasure!

This year, I unfortunately had a detached eye retina just three months before the swim so I only had a few weeks to practice. I also had to wear much larger swimming goggles than usual which slowed me down—well, that’s the excuse I’m using!

35 years with Haskel + 10 years as consultant

The opening of the large swimming pool near the Haskel Sunderland plant shortly after my retirement encouraged me to take an early morning swim before going to the office for consulting work two or three times a week. This is the same pool Steve and Paul also used before work.

When the national Swimathon for cancer started seven years ago we decided to take up the challenge. Since then we have raised over £4,500 for cancer charities. As Paul mentioned, we dedicated this year’s swim to my 38-year-old niece who passed from cancer at end 2018. We raised £1,275 this year.

Now that I am fully retired, I try to swim a mile at least once a week. As the Swimathon challenge approaches, I ramp up to three times per week for the three weeks leading up to the swim.

The first year we swam, we placed 168th out of 6,000 doing the 5km team swim – that’s the top 3%! The swim we did in 2017 was unique as I completed it in Sunderland, England, Paul in Perth, Australia, and Steve in Burbank, California. We dubbed this our tri-continent swim. This year Steve and I swam in Sunderland and Paul in Perth; we finished in the top 10% of swimmers. with our time of 2:09:04.

It’s such a great event to participate in and I am proud to see the recognition it’s getting. Two former English Olympic swimmers, Mark Foster and Duncan Goodhew even act as ambassadors for the Swimathon.

As an organization that aims to change to market we work in, we’re proud to support foundations that are doing the same. To learn how you can donate to this great cancer charity and even participate in the Swimathon, visit: https://www.justgiving.com/swimathon-foundation