High-pressure equipment, such as pumps and valves, plays a vital role in diving activities. This is especially true for critical diving missions such as rescues. Tony Webster has been training divers for years and has been involved in various diving equipment development projects. As a diving trainer, Tony understands the importance of reliable, quality high-pressure equipment and reinforces safety to his students continuously.

We sat down with Tony to learn more about his expertise in diving equipment. Below he shares the exciting story of his first project with high-pressure gas equipment.

Where did your interest in the diving industry come from?

As a teenager, one of my hobbies was SCUBA diving, so when I heard that a new professional diving equipment manufacturer had started up in my home area, I applied for a trainee position and was accepted. I started working for Aqua-Logistics in 1975, which was my first of many jobs in the diving industry.

Throughout my years in the industry, I’ve worked in different diving sectors. There are many different types of diving; the primary ones include:

For the last several years, I have been working as a commercial Dive Technician Trainer. I enjoy passing on my knowledge and experiences to the younger generation. 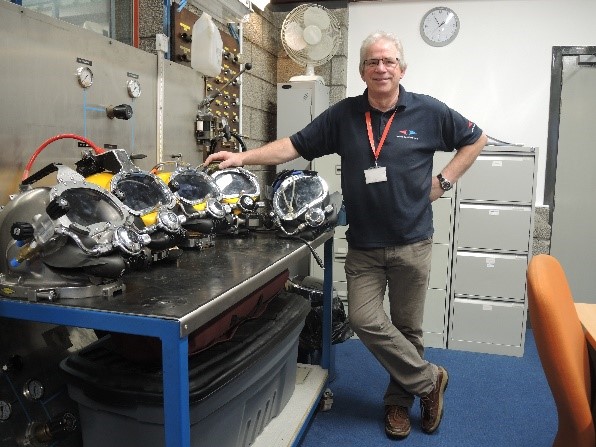 How did you come to be so involved with the equipment side of the profession?

Over the years, I learned all about methods of diving and the specialist equipment to be used. I was fortunate enough to be working for a company that designed and manufactured numerous types of equipment: diving chambers, diving bells, environmental control systems, gas control panels, diver hot water units, portable water units, bell launch and recovery systems, gas compressor and transfer systems, and more.

I was always very interested in the gas management side of the systems, such as gas storage, pumping, mixing, transferring, and supply and control of the diving gases. Haskel pumps were the industry standard for gas transfer, gas boosting, and gas mixing, which included oxygen pumping and pressure testing. The majority of diving equipment I learned about included Haskel products. I was learning about unique designs such as the AGD30, which was a combination of stacked pumps that produced higher pressures of Heliox, a special gas mixture of oxygen and helium, for divers breathing gas.

Many years later, working for a commercial diving company in Aberdeen, Scotland, I was given the opportunity to be involved in the design, fabrication, and testing of a diving gas recovery system. The team I worked with was tasked with finding a more cost-effective solution to current systems. At the time, these gas recovery systems did not exist or were in the infancy of development. Helium was (and still is) very expensive; it was the largest cost for any deep-sea diving operation using Heliox. We used to say the divers breathed out bubbles at “a dollar a breath!”

The team adopted a gas reclaim design that employed an electric-driven, “oil -free” diaphragm booster. I installed this unit on a Dive Support Vessel (DSV) and ran trials for several weeks. A lot was learned from these trials, mostly through the failings of the system. Issues included poor communications, carbon dioxide build-up, oxygen deficiency, lack of moisture control, and difficult pressure and flow control.

If they were so uncommon, why was development of a gas recovery system so important?

Apart from cost-effectiveness, the diving company was embarking on a salvage project to retrieve five and a half tons of gold bullion from the HMS Edinburgh, a ship that was torpedoed and sunk during World War II. The HMS Edinburgh, a war grave, sat 800 feet deep on the seabed (265 msw) for 40 years, holding gold bars worth £40 million at the time! A gas recovery system was necessary for the salvage operation.

There are many difficulties in commercial diving, particularly at such great depth. It would be impossible to achieve without having large amounts of stored gas to supply divers with for the salvage duration of at least three weeks. The obvious solution was to design a diver gas recovery system that would reclaim and re-use the divers' breathed gas—our first effort of recycling!

What an exciting project to be a part of! How did this project develop?

The DSV chosen for the “Gold Job”—which we dubbed the HMS Edinburgh project— was the Offshore Supply Association’s DSV Stephaniturm, a very robust German vessel that had the best dynamic positioning (DP) system available at that time. DP is a computerized system that enables the ship to be securely positioned to a fixed reference point without an anchor, using satellite information, GPS technology, and advanced propeller thruster control.

Further trials on our diver gas recovery system were completed during an earlier project in the North Sea. Results proved the system was now more effective, but needed a full-time maintenance operator to ensure gas pressure and flows were correct for 24-hour duration. In early 1981, several months before mobilization to the Arctic Circle, the system was installed on the DSV Stephaniturm for a final trial.

During the same time, a company in Aberdeen, Gas Services Offshore, had developed their own diver gas recovery system, using AGD4 Haskel pumps. The owners offered to supply their equipment on a “No Win, No Fee” basis, meaning there would be no charge if the gold wasn’t recovered.

Their offer was accepted, and the operation was mobilized with the new Haskel AGD4 air driven system in August 1981. It was a great success: 341 of the 465 gold bars were retrieved, worth more than £110,000,000 in today’s value. It was recorded as the most valuable salvage in history. 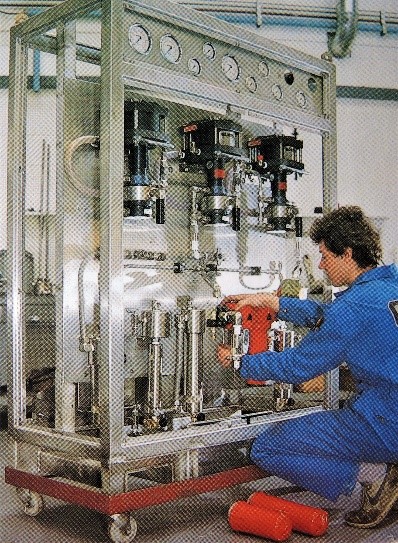 Where did your career go after such an exciting project?

A year or so later, I actually joined Gas Services Offshore and worked for them for quite a few years, helping to further develop their diver gas recovery system. At that time, offshore dive ships didn’t have enough spare electrical power to properly supply temporary saturation dive systems. Additional generators and diesel-driven work air compressors were commonly utilized.

Using Haskel AGD4s in the diver gas recovery unit, in parallel or series, was the perfect combination for the right pressures and gas flows at any given diving depth to 300msw.

The design team implemented ideas that were quite innovative for the time, such as an "Auto-Start/Stop" controller. This basically sensed the inlet and outlet pressure of the Haskel pump configuration and started or stopped the drive as required. This was further improved by making the same sensing block into a ‘"Proportional Control." With this change, the drive air quantity was now increased or decreased to drive the pumps at a slower speed, just enough to pump the right amount of gas, as demanded by the diver.

Other improvements included the design of a stainless-steel shuttle valve, integral cooler/silencer, and some simple, quick maintenance tools.

Do you continue to use your equipment expertise and experience as an instructor?

As a Dive Technician Trainer, I always emphasize the importance of diver safety and the use of quality equipment. A diver could quite easily drown if any one piece of equipment failed, that’s why there is always a back-up system to avoid "Single Point Failure."

All diving and auxiliary equipment should be proven safe, reliable, and fit for purpose for the user and operator. Because of their known quality, we use Haskel equipment such as the M50 and AGD30 pumps during training courses on high-pressure hoses and gas transfer techniques.

The basic design of diver gas recovery systems has not changed very much in nearly 40 years. The Haskel booster configuration and control method is still the same and still highly reliable. There are hundreds of these systems fitted on dive support vessels around the world, and they have clocked up millions of man hours. At an average recovery rate of 90%, the saved gas results in billions of litres. The impact on environmental conservation, reduced logistics, storage costs, and financial savings— not to mention diver safety—is almost immeasurable!

Want to learn more about the applications our high-pressure pumps can fit? Connect with one of our team members.