Hydrogen refuelling stations and the role of gas compression technology

If hydrogen mobility is to play a major role in the world’s energy transition and help to combat climate change, refuelling infrastructure will be key to its adoption. Many observers believe that international government policy toward hydrogen has reached a tipping point and that the public/private investment needed to deploy a hydrogen refuelling station network, at the level needed for a viable hydrogen economy, is starting to materialise.

To realise such an economy, gas compression technology will have to continue meeting and adapting to evolving market demands. Simply put, gas compression (boosting) is at the heart of making hydrogen refuelling possible.

Gas compression has been around for a long time and is used in a range of applications where gas transfer of increased pressure is required. Operators from a range of different industries use a variety of compression technology depending on the type of gas that is being compressed, the amount of pressure increase and the flowrate that needs to be achieved. So the compression of hydrogen is not new, but its use in such a wide range of refuelling applications is, and this is placing the spotlight on the important role that gas compression plays as a critical part of a hydrogen refuelling station. 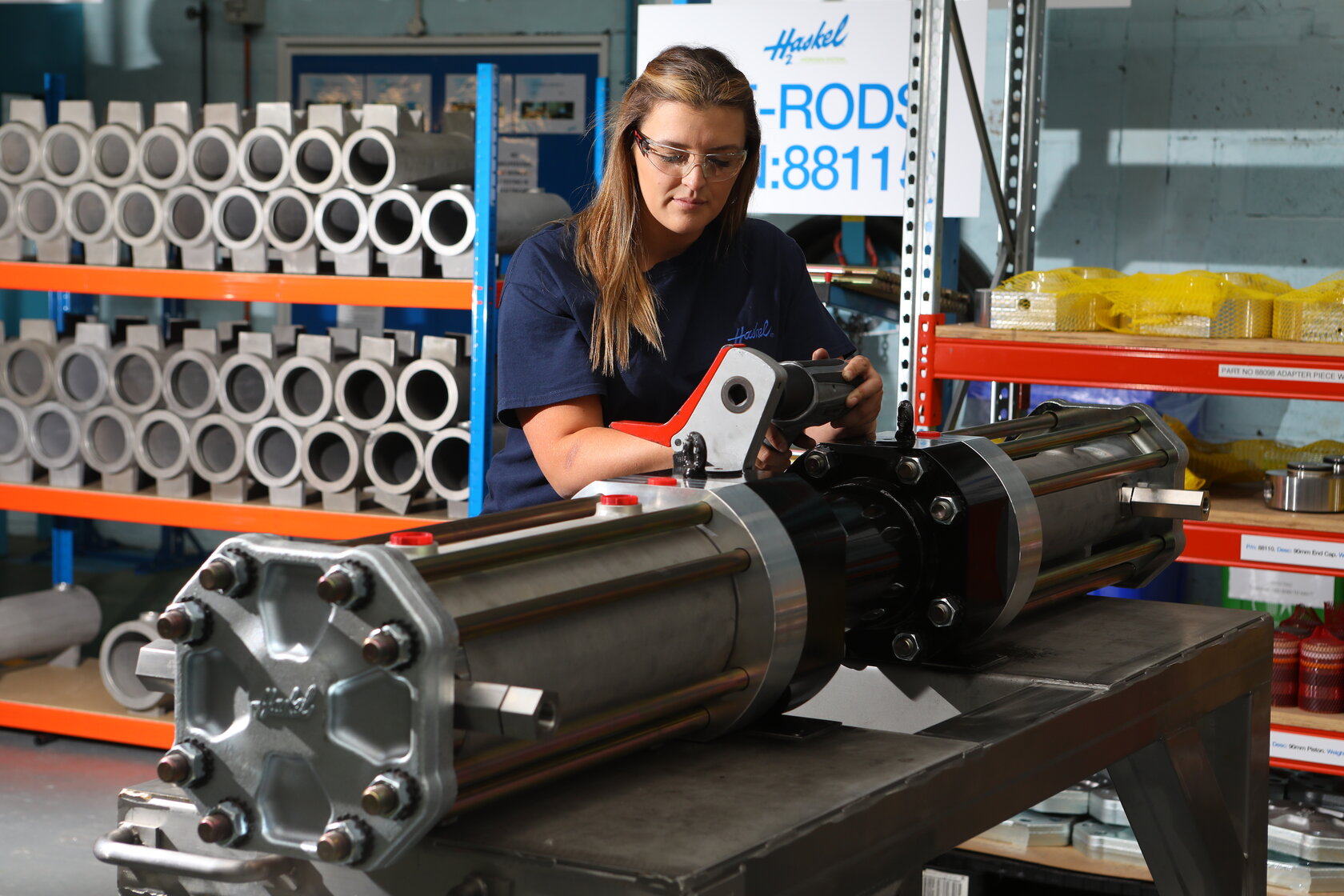 Globally, there were 553 hydrogen refuelling stations in 2020. In Europe, Germany has the most with 100, while the UK has 11. The Hydrogen Council predicts that there will be over 10,000 stations by 2030, which, although it might be a relatively small number compared to conventional stations around the world, represents a sizeable investment into hydrogen refuelling infrastructure.

At the moment, and for the foreseeable future, there are two main pressures that vehicles use for storage: 350 bar and 700 bar. The 700 bar refuelling applications require a higher pressure dispensing, because these vehicles only feature a finite space for fuel storage; the more gas you can put into the vehicles’ onboard storage system, the greater range the vehicle will have. Three hundred and fifty bar pressure is typically used for heavy duty vehicles and 700 bar for lighter vehicles, although over time we expect heavy duty vehicles to move into the 700 bar category to give those vehicles a greater range.

The gas compression element of a refuelling station is integral to allowing you to achieve the refuelling pressures at those higher levels. The most efficient way to dispense hydrogen into a vehicle is by a method called cascading, which allows the gas to flow from a higher pressure to a lower pressure until it gets to equalisation. The best way to achieve this is by taking the inlet gas pressure and compressing it to a high pressure to be held in the storage system, which ultimately feeds the dispenser to the vehicle. Refuelling stations can store gas at a variety of pressures to allow for the most efficient use of this gas.

Within a standard hydrogen refuelling station, there are three key elements: compression, followed by storage, and finally dispensing. Having the right combination of these three elements is critical to the efficiency of the station.

Gas compressors help the refuelling station to meet its operational capacity profile by replenishing the onsite storage system with hydrogen at the right pressures. Lots of thought and design goes into the interface between the compression, storage and dispensing elements in order to size the station correctly and install the right amount of compression capacity, complementary to the external storage.

Within the domain of station design and arrangement, operators must also consider the number and types of vehicle they’ll be filling, such as cars, trucks, buses or other commercial vehicles. There are numerous ways of building and configuring a station, depending on the needs of the operator and the fleet characteristics.

The importance of inlet pressure

Another consideration for refuelling station operators is the inlet pressure, which is determined by the source of the hydrogen. There’s a difference in the compression capacity required for an inlet pressure of 30 bar (average supply pressure from onsite electrolysis) to that of say 200 bar (typically delivered by cylinders). In a 700 bar station, the external storage facility would typically hold gas at up to 1,000 bar, so if the source is at 30 bar, then there is a much greater compression effort required to reach this pressure. The compression systems can be configured in multiple stages to achieve this requirement, which is a standard approach to address this sort of scenario.

When we look at compression technology, some traditional compression units can struggle with the stop-start nature of refuelling stations and the variation of inlet pressures, whereas reciprocating compression can deal with this challenge in a more versatile manner.

The cost implications of compression management

Getting compression right is key to ensuring that the refuelling station’s operating costs are not unnecessarily high. There’s a fine balancing act to be made between having hydrogen available at the correct pressure for fast refuelling when it’s needed versus ensuring that the total cost of ownership is kept at an affordable level.

At present, most hydrogen station investments are reliant on a mix of public and private investment. Over time stations will be expected to operate without funding, and investors will want to be confident that they are going to see some kind of return, so they’ll need to analyse and understand the operating model.

At that point, there will be a keen focus on cost versus return, at the heart of which is the investment and operational cost of compression and storage. This represents an interesting challenge for the hydrogen compression market. In future, stations are going to get bigger, and they’ll need to dispense more fuel more quickly.

Currently, the average hydrogen refuelling station is designed to dispense around 400-500 kg a day. As hydrogen HGV trucks come online, that figure will increase quite significantly. We can see a trend in motion for stations capable of dispensing 1-2 tonnes a day. By 2030, many believe stations placed on the main transport corridors fuelling the HGV sector will be dispensing up to 6 tonnes a day.

It’s expected that hydrogen will become more prominent in medium- to heavy-duty vehicles, due to limitations created by the amount of space taken up by batteries and their weight, linked with extensive charging times and range limitations. This trend is reflected by the types of enquiries we have been receiving. We are getting more interest for refuelling stations designed for trucks and buses than for cars and vans.

In order to achieve a universal acceptance that hydrogen refuelling vehicles are equivalent to existing petrol and diesel vehicles, refuelling stations must offer a very similar experience in the way they look and operate. Providing similar refuelling times and ranges, and correct compression configuration, will be key to achieving this.

This article was originally written as exclusive content for H2 View.